Wow this week is fly-diddlie-eye-ing by! Must be the Monday off.

Sometimes I like to daydream about what the world would be like if we always had 3 day weekends.  I truly think this would increase people's quality of life times 10.  I mean really, 3 days off, 4 days on, it sounds logical to me!  What do ya think, will they (who are "they" anyway?) go for it?!

Ok enough of that nonsense...

Today, I woke up a little later than the past few days, and I was extra smiley because I knew I didn't have to head downtown to my bar prep class.  That's right, we have today off!! Happy dance, happy dance.

Don't get too excited though, there will still be some practice problems involved at some point, but hey, I'll take what I can get.

Since I didn't have to rush off to anywhere, I decided to try out the gym out here for the first time (I ditched it yesterday to go on a run with this really cute guy I know...).

It was pretty much love @ first sight when I saw this: 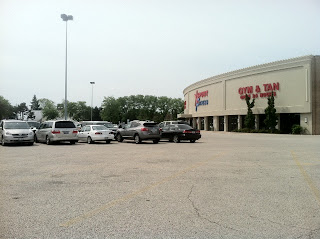 A huge, wide-open parking lot!
What?! You mean I don't have to spend 20 minutes trying to cram my car into a packed garage?!

I also chuckled a little when I asked the front desk lady where the list was to sign up for spin class, and she looked at me like I had 2 heads.  This...is awesome.

Unfortunately, I was not so in love with the spin instructor I stumbled upon.  I'm not sure if she had 6 cups of coffee this morning, or if she was just really high on life, but she was like a raging chipmunk on that bike.

I about spinned out of my tennis shoes.  Every single set was filled with sprints to an insanely fast-paced song.

I'll give it to her though, she did have energy and spunk, and I did leave sweaty.

When I came home from that party, it was past time for some breakfast.

I have a confession to make...

I'm getting a little bit bored with the oats.  {Gaaasssp.}

Not so fast, let's not go crazy here.  I'm still gonna probably eat them 90% of the time, because I'm loyal like that.

I think I'm just going to switch it up a couple of days a week -- maybe with something savory (like an omelette), or maybe with some different kind of carbie sweet.

I woke up today with a hankering for some pancakes.  I usually reserve pancakes for the weekends, but since I had this morning "off," I decided to do it up big!

I couldn't make just any 'ole pancakes though, because that would be too boring.

So, after a little thought, I decided to make wheat peanut butter & banana pancakes.  {I know, you all have Jack Johnson spinning in your head now, right?!}

I took some of my favorite Hungry Jack Wheat Blends pancake mix, added 1/2 tsp. of vanilla extract, 1/2 tsp. of ground cinnamon, and a sliced up bananers. 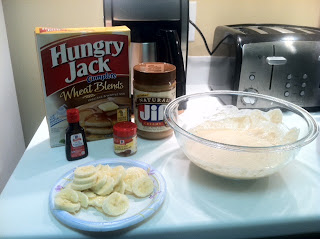 I mixed up the pancake mix + water, vanilla, and cinnamon in a large bowl, and ladled about 1/4 to 1/3(ish) of a cup of the wet mixture onto my griddle.

Then, I quickly placed some banana slices down, like so: 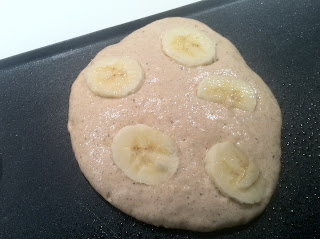 I cooked the pancakes according to the directions on the box, and served them spread with a tiny bit of my favorite Jif Natural Peanut Butter, a dash of Chia seeds (for fun!), and a little bit of lite syrup. 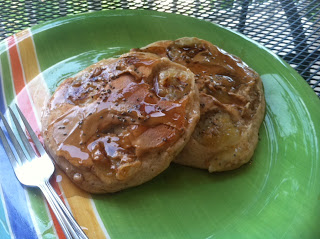 One of the biggest battles I fight when it comes to the hotcakes is resisting the urge to drown my plate in syrup.  I loooove me some syrup.  {Is there sugar in syrup?? Then yessss!!!}

Today, I measured out 1.5 tablespoons, and left the rest of that devil bottle in the fridge.

I have to say this breakfast was SUCH a treat! :)

Well, I'm off to knock off some items on the to-do list, and then I'm headed out to meet Justin for some lunch this afternoon.

Tomorrow is kinda a fun day (I might be turning 25, if "they" let me!), and since I can't have lunch with him then, we're doing it a little early.  Birthday week, anyone??

**Something to talk about: Do you get bored with your breakfasts, or do you always eat the same thing every day? What's your favorite pancake combo?

Why It's Time to Ditch That Scale!