A Different Kind of Lunch

I bet you didn't think you'd hear from me again today, now did you?! ;)
I just wanted to stop in and share with you all a breakthrough discovery I had today:
Smoothies are the bomb.com.
Well, maybe not always, but definitely after a schweaty run!
I was studying away and getting really antsy, so I decided it was time for my workout.  I had honestly started to think that maybe it wasn't going to happen today, so I patted myself on the back and headed out the door for a 4-miler.
Holy bageeze it was HOT out there!! The weather in Chicago has been so up & down lately, you never really can tell what you are walking (running?) into.
My face is still red...an hour later!  I don't know why on earth I think I don't need sunscreen when I run -- I must have a theory that I can outrun the sun or something (there's some common sense for ya).
When I got home, it was time for a cold shower, followed by some lunch.
I went over a few in my head -- sandwich...nahhh...salad...double nahhh.  And then, it hit me like a ton of ice cubes!!! I should try to make a smoothie.
I say "try" because I honestly don't think I've ever made a smoothie on my own.
Justin makes a smoothie almost daily now, and it just never sounds appetizing.
I've also never fully understood why Julie over on peanut butter fingers so often goes for a big cold glass of nutrients over a more substantial-seeming breakfast or lunch.
That was...until today.

As usual, that girl really knows what she's talking about!
I gifted myself some of Justin's Gold Standard Whey Protein Powder (straawwwberry flavor!), and got to mixing.
Into the mix went:
1 scoop protein powder
1 bananer
5-ish fresh strawberries
1 cup of ice
1 cup of almond milk
1 tsp. pure vanilla extract 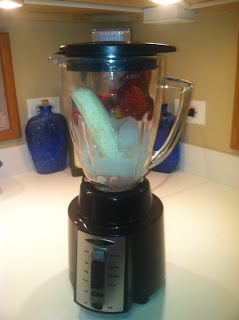 By the way, I discovered that our blender actually has a "smoothie" button. Genius.
I filled up my newly purchased tumbler, almost to the point where it was overflowing, and dug in with a spoon: 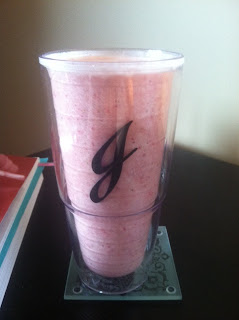 Unlike that cookie dough monster I tackled, this thing dominated ME!
I couldn't finish more than half of it, so now it's just chillin' until I go back for more.
If you haven't jumped on the smoothie train yet, there's no time better than now, I'll even share a seat with ya! ;)
Have a great night!
xoxo
Jess
Posted by Jessica at 4:52 PM