How are you all doing today?!

How am I? Well, let's just say I am rolling with the punches on this funday Monday.

Justin & I got our day off to a good start with an early morning trip to the gym (anyone else still rise & shining?).

I happened to watch a little news while I was on the StairMaster, which was mostly weather-related, because we had some crazy storm that was supposed to be rolling in.

Of course, I immediately started worrying about my commute downtown, but thought I'd be fine since they said it wasn't really supposed to hit until 9am, when I'd be safely in my seat at BarBri, right?

I don't know why I ever trust these weather people.

It started looking like a natural disaster was on its way right as I was about to leave our apartment at 8am.

Just before I left, I heard my train was delayed an hour due to high winds.  I didn't feel like driving in the madness, considering it seems like people in Chicago are completely inept when it comes to driving in any sort of rain.

So, I decided I would just go outside really quick to help bring something down to the car for Justin, and then I'd come back upstairs and study at home for the day.

I got on the elevator, and just as it hit floor 2, the car stopped.

The power went out.  I was stuck, in this elevator, by myself.

Naturally, I started to freak out.  I wouldn't have been so worried if it weren't for the fact that: a) last time our power was out, it was out for close to 48 hours, and b) it was freaaaaaking HOT in there!

I gathered myself, called Justin (thank God he was still home and I got cell service in there), and then the fire department, to come get me outa there!

About an hour later, I was rescued.

The fire department seriously has magic powers.  They have the keys to everything in the world, so they were able to hydraulically move the elevator down the shaft and pry the door open so I could jump out.  Hallelujah!

I will note, however, that at first, they told me they were going to "drop me down. WHAAAT?!?!

Poor word choice, but we all got a laugh.

Anyway, moving right along, we are now without power (again, I know!), which means I might be seeing a lot of peanut butter & jelly over then next 24 hours.

We may be short on jelly: 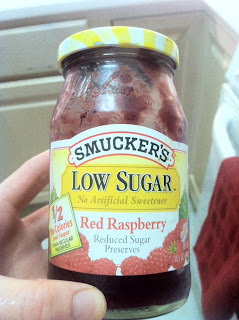 But, at least we do have enough peanut butter to feed an entire elementary school: 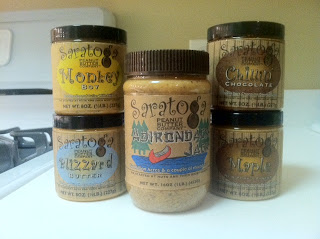 {And we have 2 more jars on top of that}

I think I mentioned it before, but I took advantage of a deal recommended by Courtney over @ Sweet Tooth Sweet Life, and ordered a sampler pack + a full jar from Saratoga Peanut Butter.

I really had my eye on the Blizzard Butter (white chocolate pb!), so I ordered a large jar in addition to the small, sample size one in the pack.

When I opened the box, I was super sad to see my big jar of Blizzard Butter was not there.  In its place, however, was something called "Adirondack Jack."

I emailed the company to tell them what happened, and the said they'd ship me out the Blizzard Butter that day.  Woo hoo!  I got my other jar super quickly AND I got to keep that Jacky jar, too.  Sweet deal.

I love peanut butter in lots of ways (on toast, in my oats, by the spoonful, off of my finger...), but there really is nothing better than a good old PB&J: 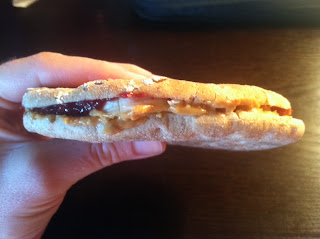 Especially with a couple of nanner slices thrown in.

I think my love for nut butter can really be traced back to this little number:

Before I leave, I want to say a big HAPPY BIRTHDAY to my best friend, and workout inspiration, Miss Ashley!! 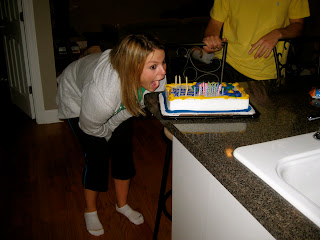 I miss you, I love you, and I hope you don't kill me of this picture are having the BEST BEST day ever! :)

Have a great night, everyone, and stay clear of those elevators!