I got off to a little bit of a later start than normal today, because I did something a kinda crazy...

I've been feeling really tired the past couple of days, which has not been so great for my studying stamina.

Justin suggested I sleep in a little today, so I did, and I am feeling much more rested.

I strolled leisurely over to the gym this morning to do 20 minutes on the butt burner (aka StairMaster), while studying my Wills outline (earthshatteringly exciting material!), followed by a quick, but powerful strength circuit.

I will share the deets on that one with you guys soon.

After a much-needed shower, I heated up a breakfast fit for a champion... 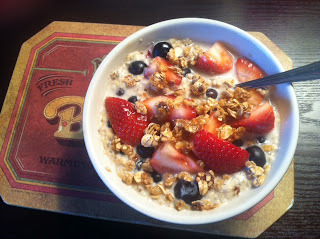 By the way, the left carton below is much > that the right carton.  Just sayin'! :) 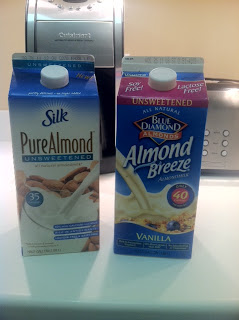 The Blue Diamond might be slightly (I'm thinking 50 cents?) cheaper, but the Silk by far makes up for the expense in taste.

After breakfast, I contemplated where I wanted to go study for the day.

I have been spending some days at home, and some days out of the apartment @ places like Starbucks.

Ironically, even with the office I had been so longing for, I seem to be more productive & focused when I get out.  Go figure!

At home, I'm just more likely to waste time doing random chores, and I am always tempted to take "just a short" nap.

Today, I ended up driving a little out of my way to get to a Barnes & Nobles, which used to be one of my favorite places to go study during college.

I was excited, once I got to B&N, to see a huge cafe, but disappointed, when I learned, that they had NOT A SINGLE OUTLET! How rude!

Luckily for me, there was a Panera just down the strip mall.

This Panera is the jam.

It is quieter than the one that is closest to our apartment.

They are not trying to freeze me out with the AC.

AND... I have received 3, that's right THREE, free samples since I've been here. 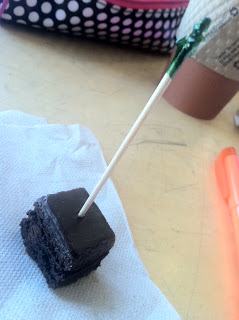 They had me at "would you like a sample of our double chocolate brownie?"

I also got a little cup of frozen lemonade, and a bite of maybe the most delicious cookie I have ever tasted (M&M sugar cookie fresh out of the oven). 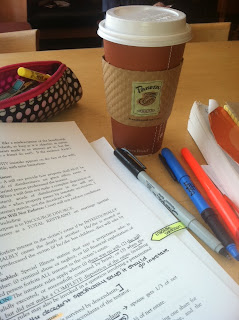 Skim latte.
I rarely get lattes anymore, because I'm having an on-again, off-again relationship with dairy.
Today, I went for it, and everything was allllll goood! :)
After a few solid hours of studying, my stomach started growling, so I headed up to order lunch. 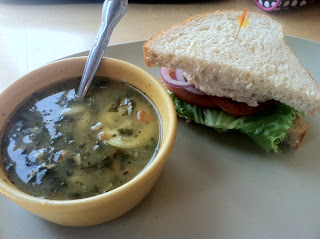 {1/2 a Tuna Salad on Honey Wheat + cup of Lemon Chicken Orzo soup}
I love that Panera now lists the calorie content next to all the items on the menu, even the half-sized portions.
While I'm not really a calorie counter, I hesitate to eat lunch out all that often since I have no clue what I'm getting myself into.

This way, I feel like I can make an educated decision about my mid-day meal.
Lunch was delicious, and now I'm getting back into these books.
Have a great afternoon, and I'll cya for dinner? :)
xoxo
Jess
Posted by Jessica at 3:02 PM